On 25th February, I had my ticket, costing Rs. 1,295, in a First Class coach, on the 52541 New Jalpaiguri to Darjeeling toy train. This train was scheduled to depart NJP at 8:30am but there was no train on the platform. As passengers waited, railways announced around 9am that the train will be delayed and will depart at 12noon!

As per railways rule, passengers will be able to cancel their tickets if any train is delayed by three hours, but that had to be done before the scheduled departure of train. So you see, announcement made 30 minutes after scheduled departure automatically disqualified passengers to file TDR (ticket deposit receipt) for full refund.

This railways made sure they won't have to refund those many costly tickets! They portray forced us with two difficult options: (a) don't travel and forget refund, (b) forget the joy of toy train ride and suffer inconveniences. I opted for the second as I couldn't let my hard earned money go down the drain.

Why inconvenience? Because the normal journey takes 7 hours! Your whole day is practically gone. Yet, Indians and foreigners but tickets and thus runs this UNESCO World Heritage train. By making it depart at 12 noon means the train would reach destination after 7pm; but it won't, as running this train uphill after sunset in the darkness takes longer time!

That evening, my train reached at 9pm! It was dark, Darjeeling had little lights at that hour as many shops close and other activities end and it is cold, quite cold there. That night, temperature dipped to 7°C and we came uphill from the plains which was 33°C hot!

There were no vehicles in the station area. Passengers were anxiously calling their hotels to arrange cabs. I, however, couldn't get any cab and had to walk further uphill by 1.8 kilometres to my lodge.

During the journey, the sun set before we're arriving Kurseong; after that stop, rest of the road was covered in complete darkness as the Hill Cart Road has no street lighting. So, no sightseeing, tensed journey for passengers, only time killing and endless waiting to reach destination.

Indian Railways badly failed us. And it's not only us that day, from the information I gathered from base station New Jalpaiguri, this late running is very normal.

Ministry of Railways is foolishly messing with a UNESCO WORLD HERITAGE SITE. Regarding all other broad gauge mail/express trains, the late running is even more worse. 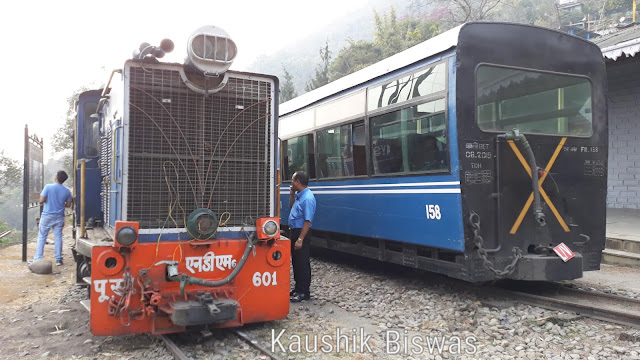