For very many years, Kolkata had it's own very popular yellow taxis which used to operate commercially, then came the new age operators like Ola, Uber, Taxi For Sure, Meru Cabs, Mega Cabs etc. But clearly, Uber is emerging as the most popular commercial taxi service, subject to some basic drawbacks. You might think: popular, with drawbacks? Yes, I'll explain. Firstly, it's services are only for the smartphone owners and it requires downloading of their own app. It's not for anybody else, not even if you have a computer and internet access. You cannot stop one Uber at sight and ride to your destination. You have to, every time, book your ride through their app. Be it from your home or somewhere in the middle of the road. 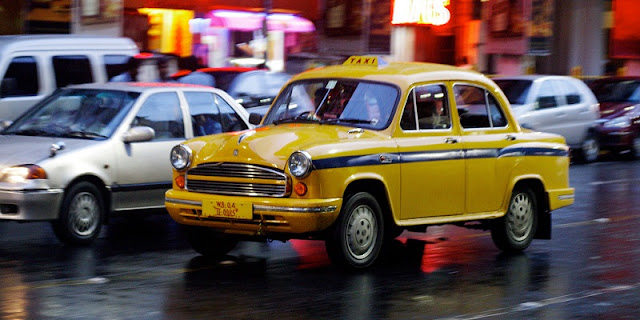 Kolkata's own yellow commercial taxis may have their own sets of disadvantages, but undoubtedly still the most popular ones. This requires only one qualification, to have the required cash in your pocket to ride to your desired destination point. You can stop a vacant one at sight, though 'taxi refusal' is indeed a problem in the city.

Next, Uber taxi service rates aren't fixed as such. Rates are hiked any time, any where and the app will let you know before you book your ride. Yellow taxis, reportedly 34000 at present, do not do that to passengers. They follow a taxi meter which has a uniform policy. Uber has a base rate, then rate per kilometer etc.

Uber has limitations and at some situations it might appear to you as restrictions. Like, one person is to have only one account, but what if you own two phones or one phone and one tablet? You have to keep changing SIM cards? Because the driver may call in. If your mother, father or spouse has accounts and they face problems, you may not interchange your handsets and log in into different accounts within your family. Ho such hassles with yellow taxis.

While Uber taxis aren't time-limited in regards to operating hours, but drivers have the ability to cancel your booking, so refusal issue remains and it happened with me multiple number of times and then you have to book again.

Uber is yet to operate in a practically feasible basis and to spread out to the mass instead of restricting itself to smartphone users only. I hear, there are organizations trying to rope in yellow taxis into online services as well, so Uber will get tough competition in the near future.

The value of a free ride was Rs.250 earlier, which has been cut down to Rs.150 now. This week, from 16th to 21st February, Uber has announced a chance to win 100 free rides for the existing users who must take at least 3 rides during this time, and also stated, more rides means more chances to win. Which means, rich people riding Uber will be brightest elligible to win.
Labels: Uncategorized
Email ThisBlogThis!Share to TwitterShare to Facebook