When Calcutta's Metro Railway services started up for the first time in 1984, I was adviced some small things about what to do in case of a service disruption while traveling underground. Having a man in the family who worked in the Metro Railway helped me a lot in receiving helpful guidelines. But the Metro authority hasn't done much to educate people and to raise the level of awareness about the same in the later years. It's very important for all passengers to know and understand what to do and what not to do during unusual happenings in the Metro Railway.

India's first underground railway is in a very sad state. It's a shame. There are approximately 13 or 14 non-AC rakes and about 14 AC rakes operating in Kolkata's Metro Railway now. As many as 7 non-AC rakes are so old and outdated that these need to be rejected and fresh requisition for coaches has been placed in the Integral Coach Factory in Chennai. State of the art brand new AC rakes are required in the carsheds. 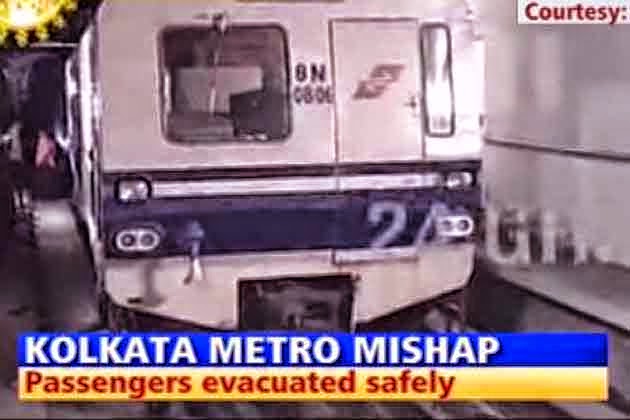 There are video display units in every station which can be and should be used for passenger safety & awareness system, but we only see advertisements and filmi gaana in those video units. The General Manager needs to look after this and direct the concerned staff to avail these systems for increasing awareness regarding public safety.

There should be a team consisting of at least 3 personnel in every station who'd look after rescue operations in case of service disruption any time during the operation hours. The passenger alerting / announcement systems must also be taken care of, sensitive and sincere staff must operate those announcement systems to assure passengers about the steps being taken by Metro Railway for passenger safety during untoward incidents.

What to do in case of emergency in Metro Railway:

1. Keep calm. If you panic, it isn't going to help you in any way.
2. If you have a bottle of water, drink some and spray some on your face to help yourself in the situation.
3. You may see other people panicking and creating a runnning around and adding tension to the atmosphere, move to any side or if you're seated, remain seated in your place.
4. If someone around you is feeling sick or seems to be collapsing, assure that co-passenger of all these and try to relieve the person's panic.
5. Help/rescue will be on the way, wait for it, calmly. It may take time, nothing is perfect in this world,

What you should NOT do in case of emergencies:

1. Don't be irritated or don't blame or curse the staff or politicians in these situations, it won't help you anyway.
2. Stop trying to check if your mobile is catching signal towers inside the tunnel. Even if you have network, it's foolish to call & inform family or friends that you're trapped and helpless - it will only put them into tension and they cannot help you right away.
3. Prevent yourself from trying to update Facebook / Twitter in such cases. Your aim should be to take care of your safety & well-being until you're evacuated from the tunnel.

Basics you should know about these sorts of service failures:

* Although there may be lots of lapses in the services, still, the staff knows what to do in emergency situations and trust them, they're concerned about every passenger's life. The staff never wants to get suspended or kicked out of job due to negligency. They have training about what to do. Sooner or later, help will arrive, definitely, and all will be well.
Labels: Traveling
Email ThisBlogThis!Share to TwitterShare to Facebook