Menu
Home » Politics » Anna for Mamata: should the AAP, Congress and BJP worry?

Anna for Mamata: should the AAP, Congress and BJP worry?

Mamata Banerjee gathered considerable amount of common people’s support in her crusade against atrocities of the Left Front government in West Bengal and ousted them from power in the 2011 assembly election. Recently, Anna Hazare, who has a considerable amount of support from the common man, sent out a 17-point charter to various political parties but only the Mamata Banerjee-led Trinamool Congress responded in a positive manner. Following this, Anna and the representatives of the TMC met and now Anna Hazare is expected to formally declare his support to the Trinamool Congress in a joint press conference along with Mamata Banerjee on Wednesday, February 19, in New Delhi.


This will ring the alarm bells in the AAP, Congress and BJP.


Aam Aadmi Party was born out of Anna Hazare’s battle against corruption and has the support of the common man, which led to the party’s rise to power in Delhi. Arvind Kejriwal’s party and Anna Hazare backed Trinamool Congress will now separately target a common set of voters, with the anti-corruption and anti-graft agenda being common in both their election manifestos. The TMC, which has contested in the North East, Uttar Pradesh and Bihar assembly elections in the last few years, is all set to contest on a national level in the forthcoming general election, and will have Anna Hazare in their political campaigns.


TMC is also looking for more allies, while, the AAP chief prefers to call everyone else corrupt and has very little chances of getting support from other parties. It can only happen if party supremos who don’t want to see Mamata as PM decide to back AAP for the time being, but they may also settle with the BJP as opinion polls have projected a big possibility of Narendra Modi being the next PM.


This sharing of common votes between AAP and TMC is definitely a worry for Arvind Kejriwal unless he manages to convince Anna Hazare to ask TMC to come together in alliance with AAP. This sounds too difficult as Mamata also has dreams of being the future PM of India. 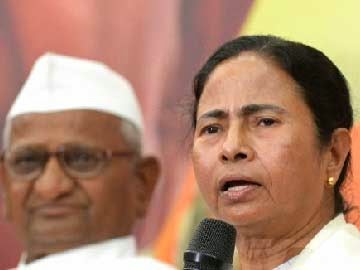 The Congress, being in the government for the last ten years, has felt the common people’s overwhelming support toward Anna Hazare’s movement on issues of several scams and black money. The BJP also, after observing people’s anger on issues of corruption and black money, voiced support for Anna’s demands from time to time just to avoid public anger.


In Bengal, the Anna-Mamata factor will create big waves and if it successfully converts into votes, then AAP’s chances in the state, if at all they decide to contest from Bengal, will be meagre. Same worries for the Left Front, Congress & BJP. Same are the chances in other places of India, for other parties, wherever Anna takes Mamata along to campaign together.


But in Bengal, the equation is quite simple. BJP can only hope for the overall national effect to play in the state. The Congress has no big aim than to retain their 6 seats. And the Left Front has recently been ousted by the people and cannot hope for many seats. In the past when people blessed LF with lots of seats, they declined to participate in the government. On that point, the late Comrade Jyoti Basu stated, “it is a historic blunder”. Will people want to waste their votes? Probably, never again in the near future.
Labels: Politics
Email ThisBlogThis!Share to TwitterShare to Facebook